He will be glorified 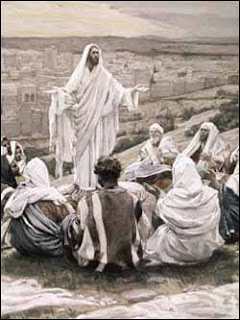 Who will be glorified?

In the first reading, Isaiah prophesied the one who was conceived even before the creation of the world would be glorified.  And he will unite Israel and bring them back to the Father's fold.  They shall be God's people and God will be their god.

Jesus also prophesied about glorification of the Son of Man.

Before we talk about who will be glorified, let's reflect on the conditions of being glorified.  I have listed the following:

Second, because he is the Messiah, the one who will unify back Israel.

Third, his offering will be a pure offering of love, "I have exhausted myself for nothing", yet he continues to offer himself to the Father as as a willing sacrifice even though that offering will not be reciprocated adequately, he earned the Father's forgiveness.

Who will be glorified?  Jesus, our Lord, will be glorified. He obeyed the Father in every way.  He is our Messiah, uniting the whole world back to the Father, and he himself is our offering in every Holy Sacrifice of the Mass.  In every moment of our lives, let us learn from Jesus who is the Way, the Truth, and the Life. 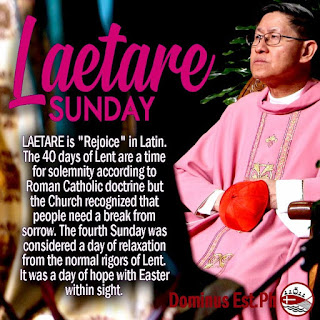 Rejoice in these important things

4th Sunday of Lent (Laetare Sunday) John 3:14-21 Rejoice!  But when do we rejoice and how? We rejoice when we accomplish something, when we receive an award, and when we feel good about ourselves.  But when trials come, when we experience failures and rejection, do we rejoice? Laetare Sunday means rejoicing at the coming passion, death, and resurrection of Jesus.  Like Jesus our rejoicing starts at the moment we start carrying our crosses.  Where is rejoicing in that? To share in the sufferings of others and to carry one's sufferings with joy could be the key to rejoicing, for it carries deep love within it.  People who don't love and are impatient with the the misfortunes of self and others abandon the crosses only to realize that they would carry their own crosses for the rest of their lives and even in the next. Second, rejoice in the resurrection of self and others like Jesus. Unfortunately, all we are concerned about is personal resurrection.  It's hard to resurrect o 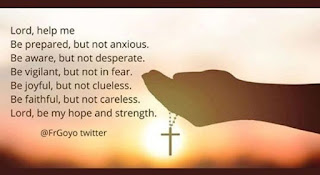 Jesus and this pandemic

Tuesday of the 4th week of Lent John 5:1 -3,5-16 We know that Jesus heals. Especially in this time of the pandemic where there is an increasing number of sick, we can still partake of Jesus' healing power by observing the following: First, by taking care of our health ourselves.  We know what will lead us to danger.  But we also know what it takes not to be inflicted by the pandemic.  Only we can take care of our health. Second, by engaging in healthy activities.  Assemblies of people who take of their masks in the name of merry-making is not wise in today's times.  Having a pandemic in the midst does not say we can't be happy and fulfilled.  We can engage in useful profitable activities in the midst of the pandemic like healthy music, planting, reaching out to our friends through social media, etc. Finally, we can help others in time of need by constantly teaching them to be disciplined.  For those in the hospital, we can render support.  Most specially, in these trying ti